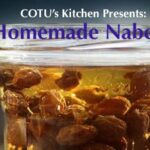 Today for the Tibb E Nabawi Series, we are going to make homemade Nabeez. Nabeez is a simple recipe that consists of water and Manuka Raisans. It can also be prepared with fresh pitted dates, but will not be as sweet. Nabeez is a blessed drink and was one of the Prophet Muhammad (saw)’s favourite drinks.

From Sunan Abu Dawood ~ Book of drinks – Narrated Ad-Daylami: “We came to the Prophet (Sallallaho Alaihe Wasallam) and said to him: O Apostle of Allah, you know who we are, from where we are and to whom we have come. He said: To Allah and His Apostle. We said: Apostle of Allah, we have grapes; what should we do with them? He said: Make them raisins. We then asked: What should we do with raisins? He replied: Steep them in the morning and drink in the evening and steep them in the evening and drink in the morning. Steep them in skin vessels and do not steep them in an earthen jar, for it is delayed in pressing, it becomes vinegar.”

You can see how such a simple recipe has so many benefits.

Now let us learn how to prepare Nabeez.

You can watch the full recipe here:

Here is what you will need: