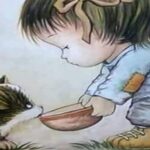 Being kind to animals is very important in Islam. We see people hurting animals and being mean to them. We are told to be so merciful to them even to the extent that when slaughtering an animal, we cannot let another animal see the one being slaughtered. The blade must be so sharp that the animal will not feel pain when it is slaughtered.

In Islam, we are not allowed to put permanent tags or piercings on animals. We see tags and strings hanging from the ears of cattle and other animals. This is not allowed in our religion. Sometimes, you may even see cats that are tipped (the tip of their left ears are cut off to indicate whether a feral cat is neutered or not). This hadith may help us better understand this:

“Has it not reached you people, that I have cursed those who brand animals on their faces, or strike them on their faces? So he prohibited that.” (Abu Dawud 2564).

From the above hadith, we also see that we should not strike or hit the faces of animals. Animals are still living things that can feel and understand. If animals fail to obey guidelines, some owners will punish them by either hitting or whipping the creature. If we think about it, we constantly disobey Allah (SWT) and His guidelines, yet Allah does not do anything to hurt us for it, rather he waits for us to understand and keeps sending us signs. We should show patience to our animals as they help us and work for us, they comfort us and love us.

We should not torture or be violent towards animals as they have feelings too.

In this narration, we can see the cruelty and brutality of this woman. Even though this seems like a very rare case, there are lots of people that treat their pets and animals like this. As per this Hadith, we see that this is a punishable act and nobody should ever even think of doing anything close to that.

In one circumstance it is allowed to kill an animal, for food purposes. There are some animals that Muslims are allowed to consume, such as cows and chickens. Though, there are guidelines. If a person kills any animal out of vain, they will be punished for it.

“If someone kills a sparrow for sport, the sparrow will cry out on the Day of Judgment, “O Lord!  That person killed me in vain!  He did not kill me for any useful purpose.” (an Nasai)

As we all know, animals feel pain and they are also in submission to Allah at all times. This hadith may help us better understand this:

“We were on a journey and during the Prophet’s absence, we saw a bird with its two chicks; we took them. The mother bird was circling above us in the air, beating its wings in grief. When Prophet Muhammad (peace and blessings of Allah be upon him) returned he said, “Who has distressed this bird by taking it’s chicks?  Return them to her.” (Abu Dawud and authenticated by Al-Albani)

Anybody who is kind to animals will be rewarded:

“A man felt very thirsty while he was on the way, there he came across a well. He went down the well, quenched his thirst and came out. Meanwhile he saw a dog panting and licking mud because of excessive thirst. He said to himself, ‘This dog is suffering from thirst as I did.’ So, he went down the well again and filled his shoe with water and watered the dog. Allah thanked him for that deed and forgave him. The people said: “O Allah’s Messenger! Is there a reward for us in serving the animals?” He replied: “Yes, there is a reward for serving any animate (living being).” (Al-Bukhari 2466).

Islam is a way of life that covers all aspects of humanity and how to live a good life. If we are kind to animals and treat them in a fair and just way, Allah will reward us and treat us in the same manner. It is not good to pick on something that cannot defend itself or speak to stop us. It cannot explain it’s feelings or pain. Allah has made us a Khalifah (leader) on this earth and we should fulfill this role in a dignified and appropriate way. It does not look good on man to have such an ego as to bring pain and suffering on beings that are weaker and defenceless. We will be held to account, so we should be very careful, Insha’Allah.