Book Review: The Jinn and Human Sickness – Remedies in the Light of the Qur’an and Sunnah 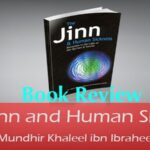 Book Name: The Jinn and Human Sickness – Remedies in the Light of the Qur’an and Sunnah

Are you interested in knowing more about the unseen world and the jinn? Then I believe that this book could help. I have always been interested in this topic. I mean who doesn’t like a good jinn story? The thing is that most of the stories we hear are not accurate and do not give you a good understanding of what jinn really are and what they are capable of.  To help me understand better, my parents got me this book.

I really liked this book, because it is easy to understand, and the author uses authentic knowledge and quotes directly from the Qur’an and Sunnah. He also used many real life experiences and legends to keep the reader interested, which kept me reading!

The author begins the book by reminding the reader that a Muslim must have proper Tawheed, Aqeedah, and have a firm belief in the unseen world, including the jinn. This is important, because this topic can lead people to go astray and even to disbelief, especially if they take their knowledge from what they have heard here and there, instead of authentic resources. I thought this was a really good place to start.

He goes onto explain some details about the jinn and the unseen world. He also mentions that sickness can come from the jinn, through magic, evil eye, and even possession! He says that there are spiritual cures for illnesses, like depression or chronic pain for example, and how the believers should explore these cures more than medical science. Mainly, this book’s main objective is to revive the Sunnah of Ruqyah.

Ruqyah is a remedy from the Sunnah and it has sadly been forgotten by many people. This remedy comes from the Qu’ran and the du’a from the Sunnah. In the book he mentions all of the ayat that you need to read to perform Ruqyah, the ones that heal different kinds of ailments, and the ones that annoy the jinn the most. It is best to purify our environment (this goes back to Tawheed first and Aqeedah) and perform these on ourselves and our families. There are people known as Raqis (like Ustadh Muhammad Tim Humble from the UK or the author himself) who can perform the Ruqyah on someone who is suffering and cannot do Ruqyah on their own, because sometimes the patient is being blocked from doing it or is not in the right mind, but even they encourage the patient to practice self ruqyah once they are able.

He warned that there are people who call themselves “Raqis” but are not genuine and don’t use authentic practices. They are just magicians or con artists who are pretending to be religious people just to make lots of money or impress the jinn, so that they can be more powerful. They hurt people by abusing them or making them do disgusting things. Their main objective is to make people do shirk by giving them Taweez (amulets) to wear or plant in their houses or other people’s houses, or even some words to repeat, but they do not treat the person with the Quran and Sunnah genuinely. People who are ignorant and do not learn Islam or study about the unseen world can fall into their traps easily, especially when they are shopping for a quick cure. The other issue is that going to these people and doing what they ask can make the person suffering think that the jinn is gone, but he is still there and will eventually come back. The goal of these Shayateen (bad / evil jinn) is to make a person do shirk so he is away from Allah. So, once the person starts listening to these fake “Raqis”, the jinn is happy and he stops causing the sickness, making the person believe they are healed.

The author teaches us how to perform self Ruqyah and the steps we have to take before starting Ruqyah (like purifying our Tawheed, ourselves, and our environment). For example, he describes “Short” Ruqyah, which should be done on oneself daily after Fajr salah, ‘Asr salah and before bed. What is Short ruqyah? You probably know about it but may not have known that it is Ruqyah! To perform this Ruqyah you must recite these Surah and Ayat: Surah Al Fatihah, Ayatul Kursi, the last two Ayat of Surah Al Baqarah, and the three Qul (the last three Surah of the Qur’an). The author has made it easy for us to find the Ayat we need to recite and has also printed their meanings, which is a really important part of reciting the Qur’an. The words mean so much more when you know what you are saying, Alhamdulillah.

[This is] a blessed Book which We have revealed to you, [O Muhammad], that they might reflect upon its verses and that those of understanding would be reminded. (The Noble Qur’an 38:29)

He has mentioned other cures for illnesses that come from the jinn, such as the bath for evil eye, using the herb Indian costus (or qust al hindi), and wet cupping (or hijama). These were cures used by the Prophet Muhammad SAW and are proven to provide relief, Alhamdulillah.

Another thing I found interesting about this book, were the stories and legends about the jinn he mentions. He describes how the jinn are seen by different cultures and that there can be truth to some of these tales. For example, he mentioned the curse of the Pharaohs. One of the stories he told that stayed with me long after I had read it was:

“One of the stories that is told is that when one of the pyramids were opened, the people started coming to it and for years they would enter and descend the chutes inside. Some of them remained healthy and others died. A group of youngsters, some twenty men, decided to enter and not to come out until they had explored as far as they could inside the pyramid. They took with them food and drink, supplies for two months, and they took string, rope, candles, fuel, axes and baskets. They entered the pyramid and most of them descended the first and second chutes. They reached the bottom of the pyramid and saw bats as big as eagles hitting their faces. Then they reached a crack in the wall from which came a constant cool breeze. They went to enter it, and their candles went out. They put the candles in glass containers and tried to enter, and the crack nearly closed up on them. They felt scared, then one of them said: Tie a rope around my middle and I will go in; if the crack starts to close, pull me out. Just inside the crack there were empty vessels, and they knew that the bodies of the dead were inside that crack. They tied the rope around him and when the gap started to close, his companions tried to pull him out, but they could not manage it. They heard his bones cracking, then they heard a loud scream and they fell unconscious. When they woke up their companions brought them out with great difficulty. Some of them fell down as soon as they reached the top of the chute. They came out of the pyramid and sat there in shock, and they were sitting there like that when the earth threw out their companion to them, speaking like a soothsayer, words which some of the monks in the monasteries of Upper Egypt explained as meaning: “This is the reward of one who seeks that which does not concern him.” Then he fell down dead.”

It is said the Pharaohs used magic so that their dead and their treasures remain protected in their tombs from the outside world and whom so ever opens one will be cursed or die (he describes many creepy stories about this). We know that the Egyptians practiced magic, because it is stated in the story of Musa AS in the Qur’an when he went to confront Pharoah and his magicians.

This book made me look at this in an aspect I have never seen before, yet something I always kept in mind is that I am not reading these stories for entertainment or to be impressed by them, but to take a lesson from them. This is what Allah SWT encourages us to do in the Qur’an over and over (the ayah from Surah Sad above)  and what the Prophet Muhammad SAW always encouraged in the Sahabah RA. He wanted them to be aware and learn lessons from the stories they heard or the ruins that they passed.

The Prophet SAW, when he passed by al-Hijr – which was the dwelling place of Thamood – said: “Do not enter the dwelling places of those who wronged themselves, lest there befall you what befell them, unless you are weeping.” Then he covered his head and hastened until he left the valley. (Sahih al-Bukhaari)

I suggest that everyone read this book and share it with their family and friends, because this is an extremely important subject matter that has lots of confusion around it. This book will help in developing a good understanding of what the jinn are, what they can and cannot do, and what we can do to protect ourselves and our loved ones from harm and sickness, Insha’Allah.

This Ruqyah workshop by Ustadh Muhammad Tim Humble is really helpful and should be watched by all Muslims, Insha’Allah. It has authentic knowledge and goes deep into the world of the Jinn and how to prepare for and perform Ruqyah. You can also find many more resources here, Insha’Allah.

Need support on your journey through Ruqyah? Please join this Ruqyah Facebook group to get resources and to interact with others on the same path!