Notes: How the Quran was Revealed and Compiled? 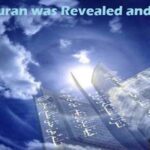 Asalamu’alaikum, Recently as a project my Sister and I studied a course online from Shaikh Hamza Yusuf, called: The Foundations of Islam. This was a great course on the basics of Islam and what we believe. It covered the Compilation of the Quran, Pillars of Practice, the Articles of Faith, the Concept of Ihsan and the Day of Judgement. We really enjoyed this and learned so much.

I am sharing my notes with you on the first topic, which is the Revelation and Compilation of the Noble Quran. My Sister, Ivanna, also worked on this, she is going to be posting her essay on the same topic, Insha’Allah. Please look out for that. Once she has it up, I will update this blog.