How to Save the Environment! 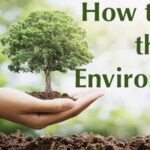 Many People believe that Allah and the Prophet Muhammad (SAW) did not speak about the environment and climate change, but this is untrue. Our relationship with nature is a very important part of Islam. We are the caretakers of this earth. This is a trust Allah has given us and we have not been doing a very good job at protecting it.

Corruption has appeared on earth and at sea because of what the hands of men have wrought; in order that God may make them taste the consequences of their actions; so that they might return. (Qur’an 30:41)

There are many things that we can do to save the environment.

Please help and think about us kids, our future depends on it.

Here are 10 things that we can start doing today, Insha’Allah.

“O children of Adam, take your adornment at every masjid, and eat and drink, but be not excessive. Indeed, He likes not those who commit excess.” (Qur’an 7:31)

3. Don’t use cars for short distances and carpool.

The Prophet (SAW) said, “Even if there is a flowing stream, still don’t waste water.”(Muslim)

“Eat and drink from the provision of Allah, and do not commit abuse on the earth, spreading corruption.” (Qur’an, 2:60)

“…So… let them taste part of (the consequences of) what they have done that perhaps they will return (to righteousness).” (Qur’an 30:41)

8. Come back to a natural way of life

“And it is He (God) who has made you successors (khala’ifa) upon the earth and has raised some of you above others in degrees [of rank] that He may try you through what He has given you. Indeed, your Lord is swift in penalty; but indeed, He is Forgiving and Merciful.” (Qur’an 6:165).

“It is Allah who made for you the earth a place of settlement and the sky a ceiling and formed you and perfected your forms and provided you with good things. That is Allah, your Lord; then blessed is Allah , Lord of the worlds.” (Qur’an, 40:64)

If we make these simple changes, we will help the environment.

May Allah always guide us and make it easy for us,  Ameen.

“And it is He who sends the winds as good tidings before His mercy until, when they have carried heavy rainclouds, we drive them to a dead land, and We send down rain therein and bring forth thereby [some] of all the fruits. Thus will We bring forth the dead; perhaps you may be reminded.” (Qur’an 7:57)

Want to know more about the environment and climate change?

Check out these Documentaries:

To know more about our diet and more natural way of eating watch these:

These can all be found online and on your media platforms.