Women Around the Messenger 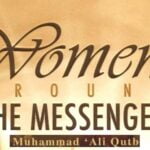 Book Name: Women around the Messenger

This book has a beautiful way of describing the different women around the Prophet Muhammad (SAW).  It covers the important women from the time of the Prophet Muhammad’s (SAW) birth until his passing. Including his mothers, his wives, and other important women in the light of Islam, such as Asma bint Abu Bakr (RA). The book also tells the stories of Prophet Muhammad’s (SAW) daughters and their lives as well. It is written in a creative and unbiased way. It is as written as if each of these respected women were narrating the stories themselves. Each of their wonderful stories are described through hadith and Ayat from the Noble Qur’an.

In all, the author illustrates the sacrifice, dignity, and traits of the women around the Messenger (SAW) in a heartwarming and, sometimes, heart breaking manner. It explains their hand in spreading the message of Islam and how everything and anything that they did was for Allah SWT alone. When speaking about Nusaybah (RA) during the battle of Uhud when the Prophet Muhammad (SAW) became injured, the book says:

“It was then that Nusaybah dropped her vessel of water and the zeal of her faith swirled up, boiling like a cooking kettle in her feminine nature. She snatched a sword from one of the retreating men, and a bow and arrow from another. She stood firm, defending the Messenger of Allah; and he saw her moving energetically around him in the glorious defence of him. ‘Umar ibn al-Khattab (RA) narrated to us from the Messenger of Allah (SAW) , “Whenever I turned left or right on the day of the battle of Uhud, I always saw her (Nusaybah) fighting in my defence.””

He also saw the enemy of Allah, Ibn Qami’ah, moving closer to her. So he called upon her son to protect her. Nusaybah heard this call, not only with her ears, but with her entire being and feelings. She also felt it with all her senses and via the love of pure faith that flourished in her heart. She begged, “O Messenger of Allah, invoke Allah to make us your Companions in Paradise!”

This was the goal of Nusaybah. All she did was for Allah SWT, and the hopes of meeting Him. This is only one account of the many inspirational accounts in the book.

Muhammad ‘Ali Qulb does a great job of presenting the different women around the Messenger. He provided many ahadith and ayahs to back up all the points he made in his book. Besides this, there are an array of footnotes throughout the book giving definitions, references, and back story to make the book as easy to understand as possible.

Overall, I would highly recommend this book, especially to young girls and women. We do not have anyone really worthy to look up to in this day and age. These women are our heroes. Their strength and dignity was unparalleled. They should be treated with respect and their stories should be heard and related. I felt empowered and inspired after reading this book. It perfectly describes the status that Allah SWT has given women and how the Prophet SAW honoured them.

We would all like to be blessed by Allah SWT and be joined with the Prophet (SAW) and his Companions (RA) in Paradise, so we must know them and love them in this life, as the Prophet Muhammad (SAW) said:

“You will be with those whom you love.” (Sahih al-Bukhari)