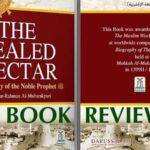 The Sealed Nectar is a book on the life of the Prophet Muhammad (ﷺ) (Seerah). It contains many stories, much detail, and even maps of Madinah and other places like Uhud and Khaibar as they appeared at the time of the Prophet (ﷺ). This was the first chapter book I read by myself on the Seerah that is meant for adult readers and I loved it, Alhamdulillah. For younger readers, I recommend The Golden Seerah that is full of simple writing and interesting pictures, which I reviewed  here, Alhamdulillah.

I chose the Sealed Nectar over other Seerah books, because it is easy to understand and interesting to read. I enjoy reading about the life of the Prophet Muhammad (ﷺ), especially about the wars that the Prophet Muhammad (ﷺ) and the Sahabah bravely fought and how they sacrificed their lives for Allah SWT. The Sealed Nectar focuses on these battles and how the Muslims, under the guidance of the Prophet (ﷺ), conquered the biggest empires of the time. This was amazing to read!

I also loved this book, because it really shows us how the Prophet Muhammad (ﷺ)  lived his life and times when he was happy and sad, brave and scared, loving and upset, comfortable and suffering, and how he always believed in Allah and loved Him even in times of hardships and pain. This showed me that if the Prophet (ﷺ) could go through so much and still be so strong, then I can be that strong too. This is why my Abba says it is important to study the Seerah.  He says that it makes you understand the Qur’an and Sunnah better, but it also shows you who the Prophet (ﷺ) was, how he lived, and how amazing he was! When we read the Seerah, we have a relationship with the Prophet (ﷺ) and love him more than anything in this world. We just can’t help it and it makes you want to be with him in the Hereafter (may Allah make it easy for all of us, Ameen)! When you see the hardships that the Prophet (ﷺ), the best of creation, went through then there is no question that those hardships can’t come to us too. If every Muslim studied the Seerah, then we will know how to deal with any situation and hold tight to Allah’s Rope like the Prophet (ﷺ) and the Sahaba RA always did.

The Message and the Man

Another thing I loved, was that this book mentions the Qur’an and Sunnah in most of the situations in the Prophet’s (ﷺ) life. It mentions when certain Ayah were revealed and gives evidence from the Hadith for many situations. It is so cool to be able to read events in detail as they happened. Like when:

The Prophet (ﷺ) climbed the Safa mountain he shouted: “Ya Sabahah!” (an Arabic expression when one appeals for help or draws the attention of others to some danger). When the people of Makkah had gathered around him, the Prophet (ﷺ) said to them, “If I told you that horsemen were advancing to attack you from the valley on the other side of this mountain, will you believe me?”. “Yes”, they replied, “We have always found you truthful.”  The Prophet (ﷺ) said, “I am a plain warner to you of a coming severe punishment.” After this vivid analogy the Prophet (ﷺ) asked them to save themselves by declaring that Allah was one and that he, Muhammad, was his Messenger. He tried to make them understand that if they clung to polytheism and rejected the message he had brought to them, they would face Allah’s punishment. Abu Lahab (his uncle) said, “May you perish! You gathered us only for this reason?” Then Abu Lahab went away. Later on Abu Lahab cursed Allah and his Messenger (SAW). Upon this, Surah al-Masad was revealed to the Prophet after Abu Lahab cursed him:

May the hands of Abu Lahab be ruined, and ruined is he. His wealth will not avail him or that which he gained. He will [enter to] burn in a Fire of [blazing] flame, And his wife [as well]  the carrier of firewood. Around her neck is a rope of [twisted] fiber. (The Noble Quran 111:1-5)

In this you see that Allah cursed him for cursing Allah and his Messenger (ﷺ). In the audio series: Seerah based on The Sealed Nectar by Muhammad al Bizry (which we are listening to now as a family), he mentions that Abu Lahab cursed the Prophet (ﷺ) two times, so Allah also curses Abu Lahab two times, when Allah says in the first Ayah “May the hands of Abu Lahab be ruined, and ruined is he.” (The Noble Qur’an 111:1)

This is how Allah sent Ayah in certain situations, like this one, where the Prophet’s (ﷺ) own uncle insulted him in front of the whole of Makkah. The Sealed Nectar mentions many Ayah like this and why they were revealed. I have found that the audio series by Muhammad al Bizry is a really good companion to the Sealed Nectar. He teaches straight from the book, focuses on many details, and holds the listeners attention really well. Plus, he is really awesome at telling stories!

The Muslims were pushed into going to Battle in the Cause of Allah and some of the greatest Heroes and their stories came from those battles. A lot of the Sealed Nectar is accounts of military expeditions and wars. It mentions many negotiations, tactics, and battles, from the Battle of Badr to the Battle of Tabuk.

The most amazing part is the detail that the author provides and how at times you feel you are right in the middle of it. For example when talking about the Battle of Uhud, it says:

Anas bin An-Nadr passed by those people who were shuddering of fear and panic, and inquired: “What are you waiting for?” They said: “The Messenger of Allâh (ﷺ) has been killed.” “What do you live for after Muhammad (ﷺ)? Come on and die for what the Messenger of Allâh (ﷺ) has died for.” Then he said: “O Allâh I apologize for what these people (i.e. the Muslims) have done; and I swear disavowal of what the idolaters have perpetrated.” Then he moved on till he was encountered by Sa‘d bin Mu‘adh who asked him: “Where to, Abu ‘Umar?” Anas replied: “Ah, how fine the scent of the Paradise is! I smell it here in Uhud.” He went on and fought against the idolaters till he was killed. Nobody but his sister could recognize his dead body. It had been cut and stabbed by over eighty swords, arrows or spears. It was by the tip of his finger that she had recognized him after the Battle of Uhud.

May Allah be Pleased with Him, Ameen. How great is that!  How courageous he was in the Battle of Uhud! Even the rumor that the Prophet (ﷺ) died did not stop him from fighting in Allah’s Cause and achieving martyrdom. May Allah give him and all of us the highest level in Jannah, Ameen.

I would recommend this book to every Muslim (and non-Muslim who would like to know the Prophet (ﷺ) better). The Prophet Muhammad (ﷺ) and the Sahabah RA are our role models. This book shows us their dedication, bravery, and brotherhood. The Sahabah RA were amazing men, who gave up everything to protect Allah, His Messenger (ﷺ), and Islam. The Seerah is something that all of as should read and understand, so that we can love the Prophet (ﷺ) more and live our lives in the best way possible. There is nothing better than the way of the Messenger (ﷺ). To know him is to love him.

This is a great book to share with your family and friends. It is even better if you study the Seerah as a family and listen to Seerah lectures. It will bring you closer together. Allah will bless your home when you get to know the one He loves the most, love him too, and send blessings on him (ﷺ). May Allah give us the knowledge of the Qur’an, Sunnah, and Seerah, and help us to live our lives in the footsteps of the Prophet Muhammad (ﷺ), love him with all our hearts, and be united with him in the Hereafter, Ameen.

Please find the link for the Sealed Nectar, a audio lecture series by Ustadh Muhammad Al-Bizry, as well as another famous audio series The Life of Muhammad (S). Once you have read the book and listened to the lectures, please watch Omar Series based on the life of Omar ibn Al Khattab RA and the Sahabah RA, you will really enjoy seeing all that you have learned come to life in front of your eyes, Alhamdulillah! Please read the book and listen to the series, you won’t regret it, Insha’Allah.

Want the audiobook of The Sealed Nectar? Please click here to purchase it.

Copyrights: This is for promotional purposes and for those that may not have the facilities, so that they can watch something wholesome and good, instead of the questionable media that is easily available all over the internet these days. Please buy and support the publisher as it is the only source that will help these beneficial publishers to run their company successfully and create more blessed content.